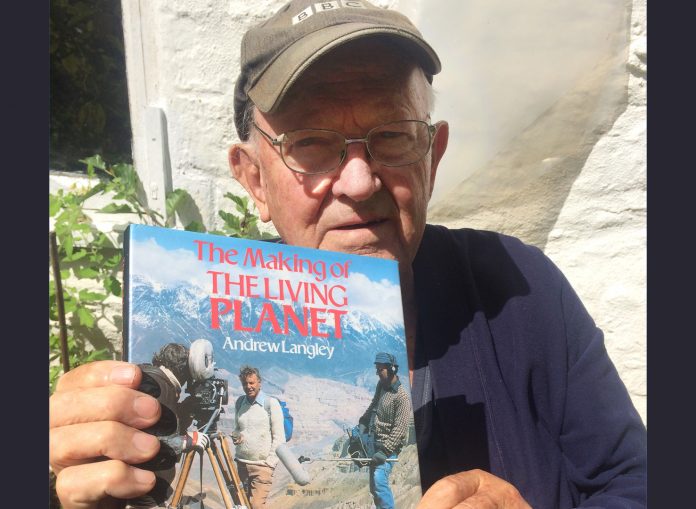 Once upon a time, long ago, there was a youthful person called David Attenborough (no “Sir” then). He could be found on the sixth floor of BBC Television Centre in London. But that executive level was not really his natural habitat, and he decided to leave that media jungle for a very different one, the natural home of many very different species. And David’s story, from then on, was to become the very backbone/vertebra of wildlife broadcasting, not only in Britain, but, eventually worldwide, reaching everywhere on planet Earth, trying to save it from ourselves.

The BBC Natural History Unit was, and is, based in Bristol, England inhabiting elegant buildings along Whiteladies Road (which leads to Blackboy Hill). My small office was there, and my job was equally junior – “General Assistant” covered it and involved tea, as the main botanical requirement. I must have been very good at it because, for whatever reason, I found myself on my way to the TV temple of the BBC (some 20,000 UK staff in total), carrying a plastic bag (not even Waitrose). A window on the executive sixth floor opened: “Come on up, Richard”. So up I went, to that high and mighty level, negotiated two (not one) formidable assistants, and into David’s, Director of Programmes’, inner sanctum. On the table was a map of Borneo; at that time, some 50 years ago, hardly known to outsiders. David was expected to reach the very top of the pecking order and not many knew about his Borneo plot. I returned to my burrow in Bristol. David resigned from the BBC much to many people’s surprise. The series we made was called “Eastward” or “Eastwards” (answers on a postcard); five of us film crew, with sound recordist – Dickie Bird (yes) and David, in his book “Life on Air” (2002) wrote: “Richard, as director, to tell me what to do” (Fancy that!). It was to become the start of a story, which is still being told. This is it.

…Fast forward for David, to become “Sir”, via the “Life” series of several of which the first was “Life on Earth”, the most ambitious wildlife series, so far – 13 episodes – an unthinkable number today. “It wouldn’t work” they said…”you can’t walk from one continent to another in the same natty beige number” to show a lizard in Australia is like one in South America = convergent evolution. “They” were wrong. “Life on Earth” was a huge hit worldwide – said to be David’s favourite of the many other “landmarks” “milestones” and other modest “epics” that were to follow…the “lifes”, then the “planets”. I was lucky enough to work on “Life on Earth” and “The Living Planet” – total 6-7 years work and travelling. It was a great experience but, in my personal view, it didn’t go far enough in telling the truth about that only living planet, Earth. What was happening to it and that wonder-full nature and places? But, as David claimed, unless viewers see what’s out there they won’t care about it. They won’t watch bad news. Ratings will fall and it will suffer in the schedules. It’s a trap. And years later, in 2021, we may, or may not, be seeing the sad results.

David and I went our separate ways. I live in Somerset near Bristol. David lives near London in a house famously full of treasures from his travels. I live in a cottage with a lot of programme material from which my editor Gareth Trezise and I have made some 100 films for free access on YouTube and Vimeo, mainly about wildlife conservation. Whereas I was fortunate enough to be left enough money to achieve that, David always had the very large budgets and a lot of time for filming. The great results were to be seen on the television screens of the world with ample publicity, and of course, linked to the now very famous man himself. At 94, his, i.e. the BBC’s, next “blockbuster” series of five programmes was shown at peak time on BBC1 in January 2021. It was called “A Perfect Planet” revealing how planet Earth happens to possess the ideal conditions for life on Earth – remember that title – 13 episodes some 40 years ago? Of course many people now know how imperfect our fragile world is, threatened by climate change and endangering thousands of species globally – in other words biodiversity. Can we turn losers into winners? Is there time? Crucially, will we act? Judging by weaknesses in our own species’ DNA the signs are not good. We seem to be our own worst enemies, and that doesn’t include a pandemic which we brought upon ourselves by messing up nature. Sir David’s messages, seen and heard by millions worldwide, for so long, reached out to a population that has now doubled to some eight billion human beings. Initially, his big series had shown the wonders of biodiversity with less emphasis on the problems it faced. I felt I could help in my modest way.

With that money left to me, I’ve made some 100 films viewable, for free, here on YouTube and Vimeo, plus an accompanying book of 150 pages in 19 chapters (coming soon to my website shop). It is a very personal view and includes David Attenborough; Greta Thunberg; biodiversity; shopping; forests; farming; fishing; food; consumption; waste/plastic/recycling; energy/oil; climate change; Covid-19; water; the media; money/fashion; Trump/Biden; aviation/travel/tourism; human population; China; nature and us. The white stork is the theme ending with some really good news. My book is free to all those interested, with donations going to charity, the Avon Wildlife Trust, based near where I live, near Bristol, click here for the link to the Avon Wildlife Trust donations page. Or donate to a wildlife/conservation charity of your choice.

Can We Save The Red?

Telling The Wildlife Truth. Or Not?