Background:
Indonesia has one of the world’s richest natural environments, harbouring an incredible diversity of plants and animals species. Unfortunately it is disappearing at an alarming rate. Home to more than 20 percent of the globe’s coral reefs, the use of toxic cyanide and hooks to catch the fish, plus over fishing will mean an exhaustion in Indonesian waters of the most valuable species in three years. 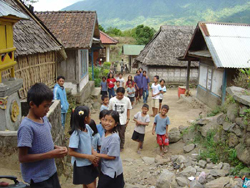 Indonesia still currently holds 10% of the world’s remaining tropical forests.
Sarah Matthews has been coordinating a project based in Bali (with the outlook to the whole of Indonesia) to make non profit films with the aim of education and preservation. The key is making films with the local people for the local people and the country they live in. The goal, to make films that can actually make a difference.

By going into the heart of countries and finding out what is really needed from the people that know the best, the natives. By working closely with the locals and other NGOs we can find out what films the countries in question would benefit from the most, what needs to be protected, what needs to be changed and who we have to target. 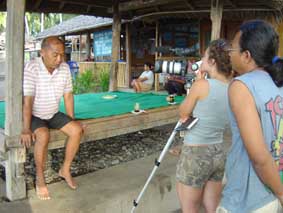 Proposed films
I believe these films can make a difference, a difference that is needed today rather than tomorrow. Time is running out rapidly.

LES
A film made with ex cyanide/dynamite fisherman to spread their message of why not to used destructive fishing methods and why it there is greater income in reef protection.

Tide of Change for the turtle?
Working with the high priests of Bali using religion and tradition to help save these sacred creatures.

Pemuteran – ‘Turnaround’
A documentary covering the magnitude of change in this small village to be set as an example to others of environmental protection efforts successfully achieved.

Vetiver
The promotion of this miracle grass throughout Asia to help alleviate mal nutrition, soil erosion plus the enormity of Vetiver’s many other fantastic qualities

Profauna
Turtle Power, a heroic animated turtle that has everyday adventures for reef to forest that is educational, informative, and fun covering a range of environmental issues.

Earth Advocates
An campaign aid showing evidence that trade of turtle is still rife in Bali. The whereabouts of slaughter houses and the trade in illegal artefacts.

Tourism
Promoting resorts that have successfully developed environmental programmes through turtle hatcheries to others. Educating locals and tourist alike.

Airlines
A compulsory (positive) five minute film aimed at tourists entering a country advising on problems of the country in question and how to aid not contribute. Plastic bottle waste.

About Sarah Matthews
Graduating from a Media Arts degree I worked in Public Relations before working and travelling abroad spending much of my time in Asia. I worked on a variety of wildlife sanctuaries and projects, the most profound being with the Orangutans of Borneo.

I have always had a strong love of nature, animals and people and wanted to combine my degree with my passion and determination to try and make a difference.

I began working with Brock Initiative scheme last year assisting Richard with his UK project ‘The Egret Has Landed’. I then went onto initiate my own project in Indonesia returning from a vacation in Bali February 2004.I spent the next few months researching the ideas and feasibility of the project returning to Bali for the month of June. The month was dedicated to many meetings finding out what is really needed from the people that know the best, the locals, NGOS and other organisations We discussed film ideas, the audience and the uses of such films. I also filmed as much as I could whilst there. The trip was a great success and I am now in the process of developing 5 – 10 different film ideas covering issues concerning cyanide/dynamite fishing, reef restoration, turtles, land rehabilitation, deforestation, waste and health problems. Based in Bali my goal is to produce films in Indonesian so that it can be accessible to the whole of Indonesia.

The project is titled ‘Waktunya untuk beru’ which means Time for Change.

How To Beat The Big Boys – PROMO

Right Whale and Osprey – Part One

Vultures – Cleaners from the Skies Part 2