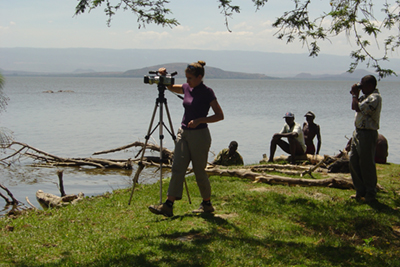 ABOUT THE PROJECT
The Earthwatch Naivasha Education Series is a series of films made for, about and in collaboration with, local communities from the area surrounding Lake Naivasha in Kenya. The films are educational in nature, primarily targeted towards schools, both primary and secondary but are equally relevant for other audiences. They cover a range of subject areas including basic ecological principles, school trips, agriculture and conservation. 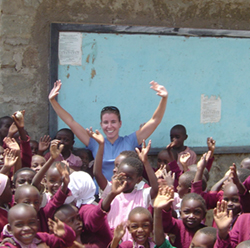 The series results from a partnership between Earthwatch Institute (Europe) and The Brock Initiative and has been made possible by a communications grant from The Vodafone Group Foundation. The Brock Initiative has identified a need for locally-orientated films in less developed countries.

Close ties with Dr. David Harper and the Lakes of the Rift Valley project working on and around Lake Naivasha, has contributed towards making this series possible. Dr. Harper and colleagues, in addition to the Lake Naivasha Riparian Association (LNRA) and the Elsamere Field Study Centre will assist Earthwatch and The Brock Initiative in distributing the films. Fifteen films are now all but complete with some having had their first showing to local Naivasha audiences. The response has been overwhelmingly positive. 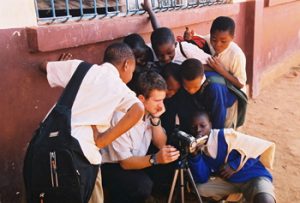 A Wild Day Out!
Producer: Ben Please
A film that will help you organise a school trip to Elsamere Field Study Centre at Lake Naivasha.

How Green is your School?
Producer:Ben Please
Elsamere Teachers Training program visits Langalanga Primary School to discover how to improve a school’s environment.

Life of Eburru – Forest on Fire!
Producer:Erin Moore
One of Kenya’s most important forests is up in flames. This rapidly shot film looked into why is nobody came to help. Shown the next day in Nairobi, it caused ministers to send in the army to extinguish the blaze!

Who’s the Best Fisherman?
Producer:Ben Please
A competition to see how is the best fisherman at Lake Naivasha? Is it the fish eagle, the black heron, or is it man? Let the contest begin!

A Land of Surprises
Producer: Ben Please
Meet some of the wonderful animals you might find around Lake Naiavsha.

Life on the Lake – Boat Trip to Paradise
Producer: Ben Please
Local guide and bird expert, Issac Ouma, takes you on a boat trip of discovery around Lake Naivasha – and there are some surprises in store along the way!

Naivasha’s Web of Life
Producer: Ben Please
This film was designed to introduce students to the ecology of their local area and to understand why it is all important.

Underwater Adventure – A Musical Journey
Producer: Ben Please
A look at some of Naivasha’s animals as you have never seen them before.

Airborne Adventure – A Bird’s Eye View
Producer: Ben Please
A musical journey that takes us to the skies to get a “bird’s eye view” of Lake Naivasha.

Naivasha Adventure – An Animated Adventure
Producer: Ben Please
A short animation for younger children taking them on a journey through the different habitats around Lake Naivasha.

Farming for the Future
Producer: Erin Moore
A local farmer demonstrates sustainable agricultural techniques, available to all people, to increase the productivity of their land, without damaging it or the environment around them. 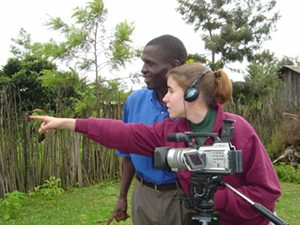 AUDIENCE FEEDBACK
Below are some brief details of just a few of the showings;
• Audience Feedback Form – Example 1Date: 2 March 2005
Location: Maua Primary School – Southlake Moi Road, Naivasha
Description of Audience: • 110 Class 7 & 8 Primary School students • About 1/3 of the audience have a television at home • 2 Adults
Films Selected: The Boat Trip and Water Cycle.
Description – Bird guide takes a school group on a boat trip – 7 minute film – why water is important and how it is connected to you.
Facilitator Observations: ‘We were invited to show the films to 1 stream of Class 8 students after classes (3pm). It became impossible to limit the viewing audience. The room quickly filled up and we had to shut the doors and limit additional children from entering. The children then played loudly outside the room and tried repeatedly to get through the windows. Isaac and I tried to quiet the children but were only moderately successful. It is recommended to limit the audience with this TV to no more than 50. However, this is proving to be an impossible task due the high demand to view the films.’

• Audience Feedback Form – Example 2
Date: 27 January 2005
Location: Ndabibi Primary School Classroom
Description of Audience: • 6 Teachers • 60 Form 8 students
Film Selected: Water Cycle
Description: 7 minute film – why water is important and how it is connected to you.
Facilitator Observations: ‘I had just filmed the children in the audience performing songs to be used in later films. When they saw the kids singing at the beginning of the water cycle film, they were excited at the possibility of seeing themselves in the future.’
Audience Comments: ‘A Teacher asked the students after watching the film how would they do on a water cycle exam. The response was “We would be unable to fail”.

Recommendations: ‘Fantastic! Think the film was to the point and the audience never got bored. Wouldn’t change a thing.’ (Extracts courtesy of The Brock Initiative) The film series represents an exciting and progressive extension to the Earthwatch’s current work which presents real, tangible and long-term benefits to the local communities in which we work.
The pilot project in Naivasha will be monitored closely to assess the impact of and response to the films by local audiences.

Ben Please
The Brock Initiative’s projects in Tanzania are coordinated by Ben Please. Ben graduated in Natural Science from Cambridge University in 2001, winning the prestigious Brownoswki Prize and the Gill Prize for Natural Science. He spent a year teaching science and music in a Tanzanian secondary school and later led a large biodiversity survey expedition to the remote south eastern region of Tanzania. Before joining the Brock Initiative at its foundation in June 2003 he worked at the Natural History Museum in London as a science explainer to school groups.

Ben films on a small Panasonic 3CCD miniDV camera, and edits in the field on an Apple G4 powerbook running Final Cut Express in conjunction with two small external hard drives, one of which will contain all the archive footage he might need for a particular project.

Erin Moore
Erin first came to Kenya in 2002 with Peace Corps as a technical/ computer volunteer in Naivasha. She set up a film editing studio and worked in close conjunction with the Lake Naivasha Riparian Association (LNRA), the management body in charge of running Lake Naivasha. Upon completion of her work with Peace Corps Erin began working with the Brock Initiative and still in close relation to the LNRA.

Erin is currently working on a series of environmental films in association with Earthwatch (Europe), and has returned to the USA where she is editing these. She hopes to return to Kenya later in 2005 subject to getting funding to continue her work.

Tale of Two Ponds and Two Tails Too

I was a Dog in Isiolo

Can We Save The Red? PROMO

Wild Thames – Wild London: the famous river that you don’t...